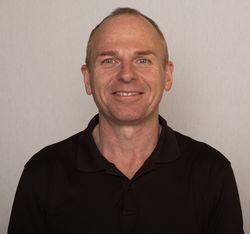 Dr. Jeff Winchester graduated from the University of Waterloo with a degree in Honours Kinesiology in 1986. Dr. Jeff then attended the Canadian Memorial Chiropractic College, graduating in 1991. After graduating in 1991, Dr. Jeff returned to Waterloo and established Bridgeport Family Chiropractic, where he helps new born children to adults in their 90’s as well as many families. His practice is about total health which includes diet and exercise and hinges on the 5 essentials of Maximized Living; maximized mind, nerve supply, quality nutrition, oxygen and lean muscle and minimized toxins. Dr. Winchester puts on various free talks at his practice which touch on the above essentials and more. Dr. Jeff has been married to his wife since 1992 and has two children Adam and Mitchell.

Jeff certainly practices what he preaches and has completed 6 marathons including the world renowned Boston Marathon in 2011.  Dr. Jeff competed in his first triathlon,  The Muskoka ½ Ironman in September of 2013, then, at the age of 51 as part of his goal setting in 2014, he completed 3 marathons and 2 half Ironman’s.

Outside of work, Jeff is an active speaker throughout many churches and businesses in the Kitchener-Waterloo region. Dr. Jeff hosted a radio show on 93.7 Faith FM for ten years called ‘Above Down, Inside Out.’

Had a very positive experience at this practice. I had a lot of back stiffness, and the treatment I received here help significantly. Dr. Jeff was... read more

Dr. Jeff, Linda and Mitch are incredibly passionate about their work and sharing their knowledge about how to continuously improve your lifestyle for... read more

Being the the athletic sort I have had no shortage of visits to the chiropractor ... BUT ... as in any profession I have experienced hacks and a rare... read more

Had a very positive experience at this practice. I had a lot of back stiffness, and the treatment I received here help significantly. Dr. Jeff was very knowledgeable and respectful. For those few who are posting hateful reviews this past month because news apparently surfaced that this doctor is “anti-mask,” take it with a grain of salt. These reviews are based solely on what these people heard or read somewhere, and not on actual first-hand experience as a patient. This is no different than reviewing a restaurant stating that they have terrible food, without actually trying their food.

Dr. Jeff, Linda and Mitch are incredibly passionate about their work and sharing their knowledge about how to continuously improve your lifestyle for the best quality of life. I have been seeing Dr. Jeff for over 25 years and he has eliminated my need for pain medication and has allowed me to live life as a 20 year old, rather than than a typical 50 year old. I recommend him and his practice to anyone with a desire to improve their life for years to come.